Send us a request for recruitment ☎ Send us your CV 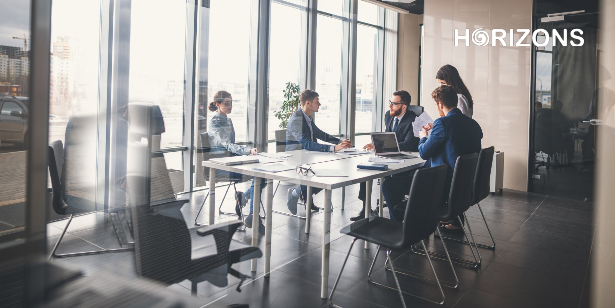 Corporate or executive business job titles are given to those who have a high level of responsibility for a company and its profit. Business titles and accountabilities likely have a wide range depending on each organzation and their needs. In this article, we will explore some of the most common executive positions. On the previous two articles we did a list of IT and software job ranked by the number of times people searched in Google the title name and the word “jobs”. These articles on job titles are part of our ongoing series called List of Job Titles with a brief job description and alternative titles to use for the roles (if applicable).

What are executive job titles?

Executive job titles describe job of persons who have C-level jobs. The “C” in C-level jobs means chief. C-level executives are in charge of decision-making and strategy that contributes to the success of a company or organization. Each executive’s accontabilities and every-day tasks will vary based on the company they work for.

Business executice titles also include those with president or director in their job title, and these executives collaborate with C-level executives to make decisions and strategy.
While many executive titles exist to describe the departments and levels of management in business, a few main positions can be found in most companies.

Here are some of the common executive titles:

CEOs are the highest-ranking executive at a company. They make major and very important corporate decisions, manage the corporate operations and resources, defining the company’s vision, tone and public image, communicate with the board of directors and management team.
The duties of CEO vary based on the size of the company. In large corporations, they are often responsible for large-scale operations only, including strategic planning for company growth. In smaller businesses, they may be more involved in daily operations alongside with decision-making and management duties. CEOs manage all other executives.

COO (the chief operating officer) is a senior executive who tackle with overseeing the day-to-day administrative and operational functions of a business. The COO typically reports directly to the chief executive officer (CEO) and is considered to be second in the organizational hierarchy structure.
They are in charge of overseeing daily operations to ensure the efficiency of a business. While the CEO sets company tone and vision, the COO promotes that tone and carries out the vision by creating policies and designing and implementing plans. Depending on the size of the company, this officer may also lead HR, playing an active role in employment.

This professional is accountable for marketing strategy, branding, the development and execution of marketing and advertising campaigns. They are primarily responsible for increasing sales through advertising.
CMO is also a researcher, staying up-to-date on trends, defining and attracting your customer base. This particular position depends on strong communication skills in order marketing plans to reach customers and business partners.

CFO (Chief Financial Officer) manages the company or organization’s finances and financial reporting. He/she assesses financial risks and opportunities and oversee and manage lower-level financial managers. They also help set and track financial goals, objectives, and budgets.
The chief financial officer is responsible of the finances and investments of a company. CFOs should be able to predict the company’s financial gains and losses to determine where and when to spend money. This requires to deal with budgeting and accounting, but also with forecasting matters.

It is a leadership role at organizations, overseeing entire HR departments and developing strategies and policies that promote sustainable growth. CHRO is a top-level management executive accountable for an organization’s employees. He/she runs an organization’s human capital management and other relevant HR technology systems as well. They may also take charge of talent acquisition processes and support ensure business objectives are achieved.
It’s not an easy job but has various jobs and responsibilities, making this role very unique for each organization. It varies with the organization’s structure.

A CIO (Chief Information Officer) manages a company’s IT and technology needs. CIOs also help businesses adopt new technologies. They play a big part in helping enterprises navigate their way through digital changes. For instance, transitioning into using cloud technologies after years of working with local servers.
Although there are parallels between a Chief Technology Officer (CTO) and CIO role, there are also some differences. One of the main similarities is that both require business acumen to succeed. However, a CTO is primarily focused on technology for external growth, such as developing technology for products to sell; a CIO is more internally focused on the company’s infrastructure.

These Chief Officers are employed by companies to develop and execute strategies to increase company sales and profits. In short, this job is to analyse the market, evaluate the competition, oversee product development, and supervise marketing efforts.
The Chief Business Development Officer is a high-ranking position. Right up there, sharing the top floor with the CEO and COO, this professional supervises all activities relating to business development.
After all, this job requires a holistic vision of what the customer wants, what the company has to offer, and how to connect both, and work hard on the growth and success of the business.

A Chief Strategy Officer (CSO) is a C-level executive who develops and executes strategies to accomplish financial growth in a company. This executive is in charge of supprting the CEO of a company with strategy executions within the company. This is a newer position that has appeared in companies all over the world.
These executives develop, communicate, execute and sustain a company’s strategic initiatives. They work closely with the board of directors and senior leadership team to create the company’s long-term and short-term initiatives and guide the company through the planning process.

The VP of a company is usually the second or third in command and supports the President by overseeing internal operations and stepping in when the President is unavailable.
Also known as chiefs or directors, vice presidents often hold authority over a certain department or unit within a company. An example of a title might be “Vice President of Information Technology.” You are likely more involved in the daily operations of one department than the CEO or COO, but relatively uninvolved in the rest of the company’s operations.

We use cookies on our website to give you the most relevant experience by remembering your preferences and repeat visits. By clicking “Accept”, you consent to the use of ALL the cookies.
Settings/НастройкиAccept/Приемам
Manage consent

This website uses cookies to improve your experience while you navigate through the website. Out of these, the cookies that are categorized as necessary are stored on your browser as they are essential for the working of basic functionalities of the website. We also use third-party cookies that help us analyze and understand how you use this website. These cookies will be stored in your browser only with your consent. You also have the option to opt-out of these cookies. But opting out of some of these cookies may affect your browsing experience.
Necessary Always Enabled
Necessary cookies are absolutely essential for the website to function properly. This category only includes cookies that ensures basic functionalities and security features of the website. These cookies do not store any personal information.
Non-necessary
Any cookies that may not be particularly necessary for the website to function and is used specifically to collect user personal data via analytics, ads, other embedded contents are termed as non-necessary cookies. It is mandatory to procure user consent prior to running these cookies on your website.
SAVE & ACCEPT